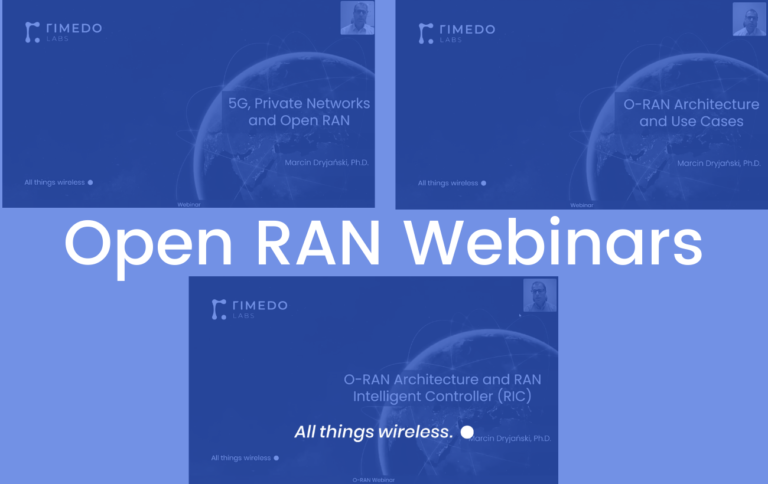 In the past couple of months, we delivered several Open RAN Webinars together with Intelefy University. In this post, you can find the collection of them, in the particular order, where the first one serves as an overview and high-level discussion, whereas the others dig more and more into details of O-RAN, as specified by O-RAN ALLIANCE.

Note: If you watch, one by one, there is a certain overlap, nevertheless, they complement each other.

O-RAN Architecture and Use Cases

The second talk provides an overview of O-RAN (as defined by O-RAN Alliance), along with the architecture details covering interfaces, nodes, and implementation options. Later, provide an overview of the RAN Intelligent Controller (RIC) along with O-RAN Alliance’s use cases. One of the most important of those is then discussed in detail, namely Traffic Steering (TS) along with sample simulation scenarios and results provided. In this, AI/ML schemes are used to adjust the system’s operation based on the operator’s choices defined as policies.

In the final 1-hour session, we discuss O-RAN entities and architecture along with the deployment options as defined by O-RAN ALLIANCE. Later, we focus specifically on the RAN Intelligent Controller (RIC) and expand on what was provided in the second webinar. The RAN Intelligent Controller (RIC) developed by the O-RAN Alliance is intended to enable AI/ML-based access to the elements in the radio network (called E2 Nodes, like O-CU-UP, O-CU-CP, or O-DU). We speak about the details of RIC, including the split onto Near-Real-Time RIC (Near-RT RIC) and Non-Real-Time RIC (Non-RT RIC), along with the O-RAN Alliance-defined interfaces related to both, namely E2 and A1. We also discuss xApps and rApps, what are the differences between them, and some examples of those.

Other Resources from Rimedo Labs

Marcin Dryjanski received his Ph.D. (with distinction) from the Poznan University of Technology in September 2019. Over the past 12 years, Marcin served as an R&D engineer and consultant, technical trainer, technical leader, advisor, and board member. Marcin has been involved in 5G design since 2012 when he was a work-package leader in the FP7 5GNOW project. Since 2018, he is a Senior IEEE Member. He is a co-author of many articles on 5G and LTE-Advanced Pro and a co-author of the book „From LTE to LTE-Advanced Pro and 5G” (M. Rahnema, M. Dryjanski, Artech House 2017). From October 2014 to October 2017, he was an external advisor at Huawei Technologies Sweden AB, working on algorithms and architecture of the RAN network for LTE-Advanced Pro and 5G systems.​ Marcin is co-founder of Grandmetric, where he served as a board member and wireless architect between 2015 and 2020. Currently, he serves as CEO and principal consultant at RIMEDO Labs.
You can reach Marcin at: marcin.dryjanski@rimedolabs.com